New Release: Herzog on Expatriation from Colonial American to the War on Terror

Ben Herzog, Ben-Gurion University of the Negev, has published Revoking Citizenship: Expatriation in America from the Colonial Era to the War on Terror (NYU Press, 2015): 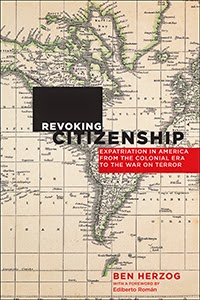 Expatriation, or the stripping away citizenship and all the rights that come with it, is usually associated with despotic and totalitarian regimes. The imagery of mass expulsion of once integral members of the community is associated with civil wars, ethnic cleansing, the Holocaust, or other oppressive historical events. Yet these practices are not just a product of undemocratic events or extreme situations, but are standard clauses within the legal systems of most democratic states, including the United States. Witness, for example, Yaser Esam Hamdi, captured in Afghanistan in November 2001, sent to Guantánamo, transferred to a naval brig in South Carolina when it was revealed that he was a U.S. citizen, and held there without trial until 2004, when the Justice Department released Hamdi to Saudi Arabia without charge on the condition that he renounce his U.S. citizenship.

Hamdi’s story may be the best known expatriation story in recent memory, but in Revoking Citizenship, Ben Herzog reveals America’s long history of making both naturalized immigrants and native-born citizens un-American after their citizenship was stripped away. Tracing this history from the early republic through the Cold War, Herzog locates the sociological, political, legal, and historic meanings of revoking citizenship. Why, when, and with what justification do states take away citizenship from their subjects? Should loyalty be judged according to birthplace or actions? Using the history and policies of revoking citizenship as a lens, Revoking Citizenship examines, describes, and analyzes the complex relationships between citizenship, immigration, and national identity.


"An original fascinating and  insightful interpretation of a neglected dimension of American political culture: the power to revoke citizenship. Herzog’s book is an important exploration of  the deeper meaning of political and national culture as it affects and is affected by legal arrangements."—Pnina Lahav, Boston University
Posted by Dan Ernst at 9:30 AM