Reuel Schiller, University of California-Hastings Law, has just published Forging Rivals: Race, Class, Law, and the Collapse of Postwar Liberalism, in the Cambridge Historical Studies in American Law and Society: 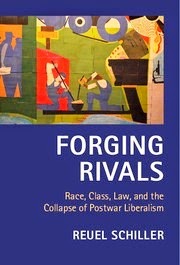 The three decades after the end of World War II saw the rise and fall of a particular version of liberalism in which the state committed itself to promoting a modest form of economic egalitarianism while simultaneously embracing ethnic, racial, and religious pluralism. But by the mid-1970s, postwar liberalism was in a shambles: while its commitment to pluralism remained, its economic policies had been abandoned, and the Democratic Party, its primary political vehicle, was collapsing. Schiller attributes this demise to the legal architecture of postwar liberalism, arguing that postwar liberalism's goals of advancing economic egalitarianism and promoting pluralism ultimately conflicted with each other. Through the use of specific historical examples, Schiller demonstrates that postwar liberalism was riddled with legal and institutional contradictions that undermined progressive politics in the mid-twentieth century United States.

Introduction. Legal history and the death of postwar liberalism
1. Forging postwar liberalism
2. Ed Rainbow's problem
3. The phony commission
4. A tale of two propositions
5. 1966: a terrible year for George Johns
6. "The day of the minstrel show is over"
7. Forging rivals, shattering liberalism

Professor Schiller puts the book in context in this post on how “the legacy of slavery and Jim Crow gave rise to modern labor and employment discrimination laws” on the Cambridge University Press’s blog. He will join us as a guest blogger in May.
Posted by Dan Ernst at 12:30 AM