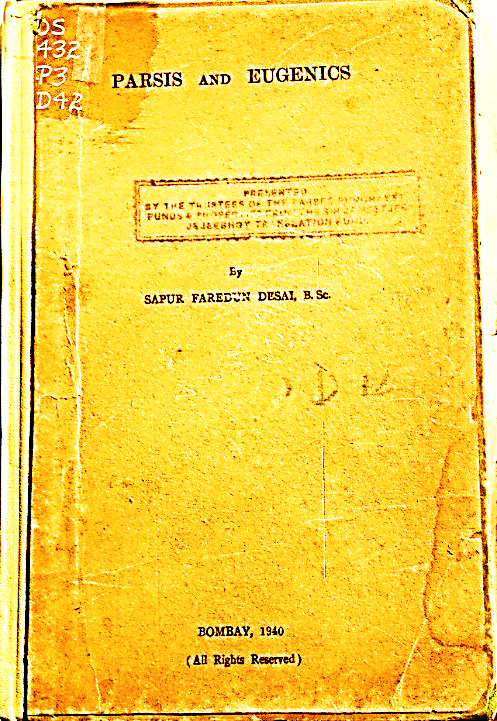 While doing research for my book, I stumbled upon something unexpected: a body of writings on eugenics by and for a non-white population. There is a rich literature on the history of eugenics around the world (Alison Bashford and Philippa Levine's Oxford Handbook of the History of Eugenics is a great place to start). This scholarship explores the ways in which race science glorified whiteness from the nineteenth century until the mid-twentieth.

What I hadn’t realized was that non-Europeans were also using eugenics for their own purposes.

In the early twentieth century, Parsis (or Zoroastrians) in colonial Bombay published books adapting Euro-American race theory to their own population. These authors were writing at a time when their ethno-religious community was developing an increasingly racialized identity. Parsis disagreed over whether ethnic outsiders could be accepted into their religion and community, or whether European wives and adopted Indian orphans were out.  This controversy played out in the courts in a series of lawsuits across the British Empire. (I explore these cases in my book, here and here).

Parsi eugenics provided a conceptual foundation for the newly restrictive race-based position. The founder of this school of thought was an orthodox Zoroastrian solicitor named Jehangir J. Vimadalal. He wrote Mr. Vimadalal and the Juddin Question: A Series of Articles reprinted from “The Oriental Review” (1910) and Racial Intermarriages: Their Scientific Aspect (1922). Vimadalal borrowed from European race theorists like Gustave Le Bon and Houston Stewart Chamberlain, arguing that Parsis, as a superior race, should not intermarry with other Asians—or even with Europeans, who were also “superior” but racially different.

There were critics of Parsi eugenics like journalist R. P. Masani in the 1930s. But Parsi eugenics had more supporters in late colonial India than did Masani’s “anti-racialism.”

Parsi eugenics fit into several larger histories among Zoroastrians. First, Parsis had long been concerned with questions of purity—first ritual, then racial. These two types of purity were connected. By the late nineteenth century, following the Zoroastrian purity laws was almost impossible if one wanted to take advantage of the educational, professional, and financial opportunities on offer to subjects of the British Empire. But if being Parsi was no longer about ritual purity, what was it about? Being racially Parsi may have been the answer.

Parsi eugenics also existed against the backdrop of a longstanding debate about “next-of-kin” marriage (incestuous marriage within the nuclear family), a practice attributed to elites in ancient Persia. Prods Oktor Skjærvø describes the controversy here.

Other non-Europeans must have developed their own adaptations of race science. How was Euro-American race science turned into something different in late nineteenth-century Japan or colonial Africa, for instance? The Parsi story, explored in chapter 7 of my book, adds a new layer to the history of eugenics. With its legal players and applications, it also speaks to the history of law in Asia and the British Empire. It is surely not unique.
Posted by Mitra Sharafi at 6:09 PM