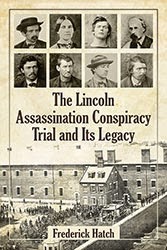 
The eight people charged with conspiring to assassinate President Abraham Lincoln were tried by a military commission under military law. The author contends that this was illegal, since the civilian legal system was fully functioning. The many ways in which the defendants’ rights were violated are described, as are the ways in which the trial testimony was either not accurate or not legally obtained. The trial is also compared with other incidents in which the U.S. military was used in police and judicial functions, with questionable results. The book is a warning against unchecked power by the executive branch of the government.