Feeley and Rubin on Federalism

Malcolm M. Feeley and Edward Rubin draw upon history in their new book, Federalism: Political Identity and Tragic Compromise, just published by the University of Michigan Press. This is clearly a book that should at least be in your library, but sometimes acquisition librarians need to hear from you, especially with a press that doesn't h 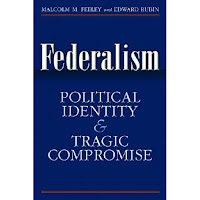 ave the marketing budget of the big houses.

The authors recommend federalism for emerging ethnically diverse nations, but a view from Nigeria points out its weaknesses, giving ethnic groups an incentive to favor regional power over the consolidation of national identity. On this point, see Rotimi T. Suberu's excellent Federalism and Ethnic Conflict in Nigeria.
Here's Feeley and Rubin's book description:

Federalism refers to a system in which a centralized national government shares power with member states. Beyond this most basic definition, however, scholars debate the applications and implications of the term. Joining the concept of identity from political science with legal principle, Malcolm M. Feeley and Edward Rubin propose a theory of federalism and test the relevance of federalism for the United States today.

Essentially, federalism represents a compromise among groups who refuse to yield autonomy yet acknowledge the benefits of forming a nation. As in the African and Asian nations forged from former colonies, federalism allows the member states---often dominated by ethnic minorities---to remain largely self-governing. In this way, a young nation can avoid secession and civil war while the people within its borders gradually abandon their local identities and come to view themselves as citizens of the nation.

The United States, Feeley and Rubin remind us, faced a similar situation in the eighteenth century as thirteen regionally distinct, ethnically diverse, and highly independent British colonies came together to found a nation. Despite the Civil War and the upheaval of the Civil Rights Movement, the federalist strategy ultimately succeeded. For the United States in the early twenty-first century, thanks to the rise of a strong national identity and a ubiquitous bureaucracy, federalism has become obsolete. This bold argument is certain to provoke controversy.

"This is a brilliant book that all who are interested in the Constitution---judges, lawyers, and professors---must read." ---Erwin Chemerinsky, Alston and Bird Professor of Law and Professor of Political Science, Duke University School of Law

"Professors Feeley and Rubin clearly define what is and is not federal system. This book should be required for serious students of comparative government and American government."---G. Ross Stephens, Professor Emeritus of Political Science, University of Missouri, Kansas City

"At last, an insightful examination of federalism stripped of its romance. An absolutely splendid book, rigorous but still accessible."---Larry Yackle, Professor of Law, Boston University

"A thought-provoking book on the nature of national-state relations in the United States federal system."---Joseph F. Zimmerman, Professor of Political Science, Rockefeller College, University at Albany