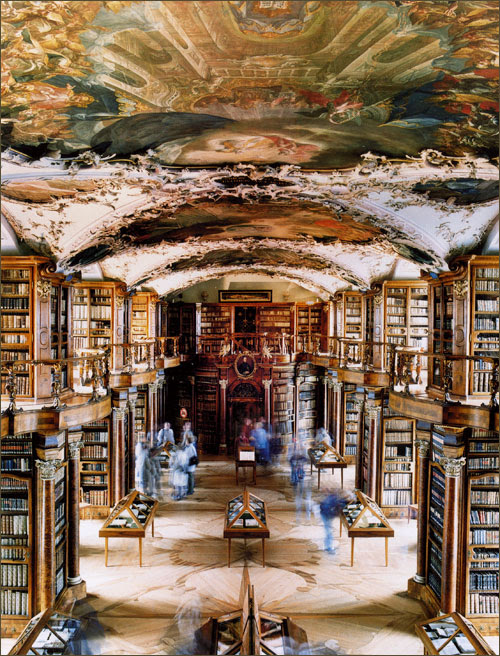 The good news: "One of the oldest and most valuable collections of handwritten medieval books in the world" is being digitized. The bad news: you may no longer be able to justify a research trip to St. Gallen, Switzerland and the "magnificent baroque halls" of its abbey library.

For centuries scholars from around the world have flocked to the Stiftsbibliothek — literally, the abbey library — in this quaint town nestled in the rolling hills of eastern Switzerland, to pore over its vast collection of manuscripts, many written and illustrated before the year 1000.

The collection includes material as varied as curses against book thieves, early love ballads, hearty drinking songs and a hand-drawn ground plan for a medieval monastery, drafted around A.D. 820, the only such document of its kind.

Andrew W. Mellon Foundation has provided a $1 million grant to support digitization of the library's medieval holdings. At this writing, 144 items can be viewed on-line.

The idea to scan the library’s manuscripts — above all, the 350 that date from before 1000 — was born as a reaction to the devastating floods that swept Dresden, Germany, and its artworks in 2002, said Ernst Tremp, an expert on medieval history who is the library director.