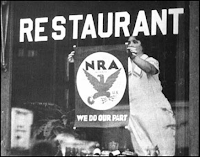 Between news reports of a revival of interest in the New Deal spawned by recent economic events and a rereading of Laura Kalman’s Abe Fortas for my seminar, I’ve been wondering what it would take to set off something like the migration of law graduates to Washington that took place during Franklin D. Roosevelt’s first two presidential administrations. The odds against one are substantial:

1. During the New Deal, starting salaries in government jobs were often higher than in corporate law firms. To state the obvious: today entry-level salaries at leading corporate law firms are much higher, and the debt burden of the average law student burden makes the money even harder to pass up. Granted, law firm hiring will be down significantly–I heard a guess of 20 percent, even before the credit crisis became acute–but I still imagine that the best graduates of the best law schools (however measured) will find work.

2. During the New Deal quite a few “Wall-Street-grade” law graduates--law review editors from elite, case-method law schools (especially Harvard Columbia and Yale)--could not find work in corporate law because of anti-Semitism and anti-Catholicism of senior partners in the leading firms. I can’t identify a similar bias against analogous “identities” among today’s elite law graduates at the entry-level. (Partnering is another story.)

3. During the New Deal young lawyers were given enormous responsibility at the outset of their career. They had much easier access to ultimate decisionmakers. (“There was no bureaucracy, none at all,” Gerhard Gesell [pictured at left] explained in an oral history.) Today’s young lawyers find themselves in much more densely populated institutions in the executive branch and presidency.

4. During a New Deal, lawyers who went to an “alphabet agency” got in on the ground floor, before job ladders were even established, much less occupied by lawyers who got their before them. Moreover, if they did see their way blocked in one agency, they could jump to another one: from the Agricultural Adjustment Administration to the Securities and Exchange Commission, or the National Recovery Administration to the National Labor Relations Board. Does anyone think a comparable burst of federal statebuilding is in the offing? 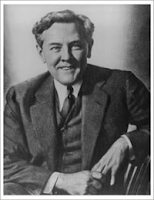 5. The New Deal started with a galvanizing event, the national bank holiday, which came after a long “interregnum of despair,” as banks came crashing down around Herbert Hoover and FDR kept his own counsel. The New Dealer Thomas G. Corcoran (pictured at right) likened the bank holiday's effect on young lawyers to Pearl Harbor: it was "a signal--an objective signal everyone heard.” Granted, things have been very bad lately, but if some comparable signal was sounded, my law students didn’t hear it.

Even after saying all that--and if there’s more to be said, please say it--I still think it might be interesting to look back at one young lawyer’s explanation of the New Deal's appeal. The lawyer was Milton Katz; his letter to his mother, written in the last week of the First Hundred Days, will be my next post.

At George Washington University Law School, [Carole Montgomery, the director of career development,] is encouraging students who planned to work at large law firms to instead apply for jobs with government agencies. Not only can graduates gain solid training, but they also can take advantage of loan-forgiveness opportunities, she said.