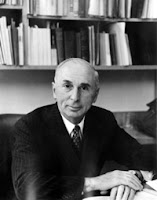 [An earlier post considered some of the circumstances that made the early years of the New Deal appealing to highly credentialed recent law graduates. Here is how one of them sized up the situation in a letter to his mother. Milton Katz (1907-1995) received his A.B. (1927) and LL.B. (1931) from Harvard. He clerked for the great federal judge Julian Mack then went to the Reconstruction Finance Corporation in the last year of the Hoover administration. From there he went to the National Recovery Administration and (in 1935) the Securities and Exchange Commission. After considering joining Carter, Ledyard & Milburn, he opted for the Harvard Law School, first as a lecturer in 1939 and then as a permanent member of the faculty in 1940. Soon he was back in Washington at the War Production Board; after the war he would serve as general counsel of the Marshall Plan. His Cases and Materials on Administrative Law (1947) focused on the development of the Interstate Commerce Commission, the Securities and Exchange Commission, the Federal Trade Commission and the National Labor Relations Board; today it serves as something of a historical sourcebook for those agencies.]

Your letter raised a very serious question, to which I have given weeks of thought. I believe the course I am pursuing is a wise one, for a number of reasons.

1. Professional success depends in part on specifically technical equipment--”knowledge of the law” and familiarity with court procedure. In at least as large a measure, it depends upon the capacity to cope with situations and deal with people, and upon connections. Up to the beginning of this year, my training had related almost exclusively to the first aspect of professional competence. I think that I may therefore profitably devote myself for a while to developing the second, and in my judgment, more important aspect. Of course, the shift is merely one of emphasis, and I shall continue to maintain contact with the more technical phase of the profession, as I have in the course of the past year.

2. I feel that we are in a rapidly changing world, and that a young man who plans his life with reference to certainty and security runs a risk of falling far behind the times. I think that it is difficult to avoid thinking in terms of 1900 or 1910 when a young man who entered the profession addressed himself to the task of filling a niche in a good office and developing routine competence, with a view to stepping into broader fields of activity in middle age after he had established himself. I feel that the only way to plan in our fluid contemporary world is to immerse yourself in it, to lend yourself to its impulsion, to move as close to the center of activity as you possible can, and so to grow and change with the times.

3. This opinion is confirmed by the advice of older men of reliable judgment, and by the experience of people who are roughly my contemporaries. Mr. Justice Brandeis, for example, has expressed himself to the effect that although in ordinary times almost the best thing that a lawyer could do would be to procure a position in the office of the United States Attorney, in times like these it is wiser to participate in the activity in Washington. Moreover, consider the cases of certain of my friends. There’s Tom Corcoran, for example, who at thirty-two had as good a place in as good an office in New York as one could expect, drawing a good salary, well-known, and apparently well on the way to high professional advancement. Nevertheless, he felt that it simply wouldn’t do to continue in the same groove, and so he threw it up and came to Washington. He brought with him four younger men from his office, who had been out of school for only a year or two. He too feels strongly that it is the part of wisdom to remain in Washington during the present period of activity. There is Tommy Austern, with a fine place in an excellent law office in Washington, who feels that he is at a dead end and expressed himself as candidly envious of my position. And there are many others whose situations bear the same significance.

4. The course I have chosen has a much deeper emotional significance for me than the mere matter of attaining an established financial and social position. As you know, the legal profession as such has never meant very much to me. I’ve always thought of it merely as a stepping stone to something else. I have felt and still feel that the only work in which I’ll find genuine satisfaction will be some broad constructive work in the work-a-day world of public affairs. By “public,” of course, I don’t mean necessarily governmental, although I think that there is a distinct possibility that the United States is reaching a stage in its history in which a young man of limited means may quite properly think of government as a possible career. Consider the enormous extension of governmental activity which we are now witnessing; people of trained and flexible intelligence will be needed to run the new machinery. There is a kind of lawyer who differs markedly from the ordinary run. I am referring to lawyers like Brandeis in his day, or Dwight Morrow, or Joseph P. Cotton. They were all of them men whose careers consisted in coping with situations complex, difficult and varied, sometimes specifically legal, sometimes specifically financial, more often more broadly economic or political. There is a faculty for dealing with situations, for devising practical solutions and getting things done, and it was that faculty which they developed, and around which they built their lives. They used the legal profession only as a thread of continuity through their lives, as a line of guidance, as a point of departure. That is the only sort of lawyer that I would care to be. It is difficult, of course, but why not play for high stakes? Each of us in the course of his life has to strike a balance between the need for security and the desire for large achievement. If there is any period in a man’s life in which he may properly honor the claims of adventure rather than certainty, it is when he is young. The risk is real, but I’m going into it with my eyes open. And thus far I have grown considerably during the past year, and that I have made genuine progress toward the condition of a fully developed, powerful personality. If ever I get there, I will be secure, in so far as security is possible to any human being; and I shall be having a hell of a good time in the attempt.
Posted by Dan Ernst at 12:16 AM