Robert Clifton Weaver and the American City: The Life and Times of an Urban Reformer by Wendell E. Pritchett, University of Pennsylania, has just been published by the University of Chicago Press. Here's the book description: 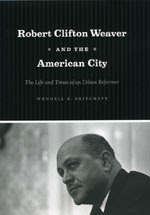 From his role as FDR’s “negro advisor” to his appointment, under Lyndon Johnson, as the first secretary of Housing and Urban Development, Robert Clifton Weaver was one of the most influential domestic policy makers and civil rights advocates of the twentieth century. This volume, the first biography of the first African American to hold a cabinet position in the federal government, rescues from obscurity the story of a man whose legacy continues to impact American race relations and the cities in which they largely play out.

Tracing Weaver’s career through the creation, expansion, and contraction of New Deal liberalism, Wendell Pritchett illuminates his instrumental role in the birth of almost every urban initiative of the period, from public housing and urban renewal to affirmative action and rent control. Beyond these policy achievements, Weaver also founded racial liberalism, a new approach to race relations that propelled him through a series of high-level positions in public and private agencies working to promote racial cooperation in American cities. But Pritchett shows that despite Weaver’s efforts to make race irrelevant, white and black Americans continued to call on him to mediate between the races—a position that grew increasingly untenable as Weaver remained caught between the white power structure to which he pledged his allegiance and the African Americans whose lives he devoted his career to improving.

A crucial and largely unknown chapter in the history of American liberalism, this long-overdue biography adds a new dimension to our understanding of racial and urban struggles, as well as the complex role of the black elite in modern U.S. history.
And the blurbs:
"Wendell E. Pritchett's engaging biography of Robert Clifton Weaver is a tour de force. Appointed by President Johnson as the first secretary of the Department of Housing and Urban Development, Weaver was the first African American to hold a cabinet position. However, few Americans are aware that Weaver was also an important figure in shaping the development of American racial and urban policy, and one of the nation's foremost authorities on urban issues. Pritchett brilliantly captures the life and contributions of this great racial pioneer and in the process reveals how racial tensions profoundly influenced battles over the future of American cities."-William Julius Wilson, author of When Work Disappears (William Julius Wilson, author of When Work Disappears )
"Wendell Pritchett's fascinating book delivers just what any reader wants in a good historical biography. Robert Weaver emerges as a complex, talented man caught in the contradiction between seeking a race-blind world and serving his race. And his personal struggles and achievements bring to light in a compelling way the shifting terrain of federal governmental authority, urban policy, and civil rights over the course of the twentieth century. This is a wonderful portrait of a man and, through that man, of dreams won and lost for a new, more equitable urban America."-Lizabeth Cohen, author of A Consumers' Republic (Lizabeth Cohen, author of A Consumers' Republic )
"We need to know the story of Robert Clifton Weaver, and to know more about the period between the Harlem Renaissance and the 1960s, a period for which African American history has not been explored with quite the same fervor as other periods. This important and accessible biography sheds light on these overlooked subjects and pays a previously unrecognized historical debt."-Arnold R. Hirsch, author of Making the Second Ghetto (Arnold R. Hirsch, author of Making the Second Ghetto )
The table of contents is here, and you can read and excerpt here.
Posted by Mary L. Dudziak at 6:43 PM