Reviewed: Katzenbach memoir and books on the culture of war, the age of Jackson, and "the new horror"

David J. Garrow reviews a new memoir by Nicholas Katzenbach, Some of It Was Fun: Working with RFK and LBJ for the Los Angeles Times, finding it "powerful and poi

gnant." Katzenbach, as deputy attorney general in the Kennedy Administration was

intimately involved in almost every civil rights crisis of the early 1960s -- the 1961 Freedom Rides, the 1962 desegregation of the University of Mississippi, the 1963-64 efforts to win congressional passage of the landmark Civil Rights Act and the 1965 voting rights crusade centered on Selma, Ala. But he rightly stresses that his...memoir...is "not intended to be a historical work of scholarship."

Still, if we can't rely upon the book for entirely dependable accounts of events such as the battle at Ole Miss, Katzenbach's perceptive and insightful portrayals of RFK and LBJ will enrich future histories for decades to come.

Continue reading here.
The Culture of War by Martin van Creveld is reviewed by Michael B. Oren in the Los Angeles Times. According to Oren, "readers of the first 300 pages of "The Culture of War" will marvel at the encyclopedic cataloging of the myriad bonds between humanity's loftiest and deadliest endeavors." The author then "ruthlessly target[s]...scholars who chart the culture-war connection's d 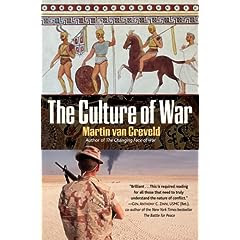 ecline in the post-World War II period." Some of this makes sense. As Oren notes,

226 wars were fought between 1946 and 2002 and that the number of refugees has quadrupled in the last 40 years alone. Indeed, the reduction in the number of wars between modernized countries -- less the result of pacifism, [van Creveld] insists, than of the fear of nuclear holocausts -- merely obscures the undiminished number of conflicts among developing nations.
But turning to the future connection between war and culture, Oren finds the book "marred by...repellent and largely unsubstantiated theories," including discussions of pampered and industrialized "Men without chests" who refuse to take up arms, and (you guessed it) feminists. Van Creveld "manages to tarnish [his book's] many contributions to our understanding of the ways in which conflict and societies interact," ultimately leaving "the question 'Are war and culture indeed inseparable?' unanswered."
The rest is here. 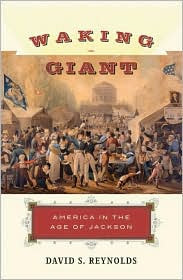 WAKING GIANT: America in the Age of Jackson by David S. Reynolds (Harper/HarperCollins) is reviewed in the New York Times by Jay Wink. "More often than not, historians treat this period with a wave of a hand, as little more than the run-up to the unbridled struggle between North and South," Wink writes. Instead, Reynolds

asks us...to more carefully consider the brawling, chaotic, boisterous years from 1815 to 1848 as a fascinating age in its own right. In this, he succeeds handsomely....

Far more than just a political story or, for that matter, a story of Andrew Jackson, Reynolds’s book shines a bright light on the cultural, social, intellectual and artistic currents buffeting the nation.

Read the rest here. Read the first chapter here.
Finally, for your Halloween, Bill Sheehan has a terrific review in the Washington Post of POE'S CHILDREN: The New Horror

edited by Peter Straub (Doubleday). "What exactly is the 'new horror?'" Straub asks.

What makes it different from, or better than, the old stuff? The answers, as Straub notes in his elegant introduction, have their roots in the horror boom that peaked and crashed in the 1980s.

When the horror boom went bust,

The problem lay in the narrow view of horror fiction as a marketing category tied to specific tropes and specific expectations, rather than as a flexible instrument capable of addressing the "essential terror within the human animal." The 24 stories in Poe's Children illuminate that "essential terror" through an impressive, highly personal assortment of perspectives and techniques. The result is a remarkably consistent, frequently unsettling book that does as much to blur the artificial boundary between genre fiction and "literature" as any anthology in living memory.