Foner on Gordon Reed, Moyn on Bass, Novkov on Dudziak

Eric Foner, Columbia University, takes up Annette Gordon Reed's THE HEMINGSES OF MONTICELLO: An American Family in today's New York Times. He finds it "a work based on prodigious research in the voluminous Jefferson papers and other ­sources," t

hat "traces the experiences of this slave family over three generations." In Foner's view, it is "engrossing and suggestive, it is also repetitive," and "the most fascinating parts...deal not with Sally Hemings herself but with other all but unknown members of her extended family." He wishes that Gordon Reed had been more circumspect on the nature of the relationship between Sally Hemings and Thomas Jefferson.

Was it rape, psychological coercion, a sexual bargain or a long-term loving connection?...Sometimes even the most skilled researcher comes up empty. At that point, the better part of valor may be simply to state that a question is unanswerable. Gordon-Reed’s portrait of an enduring romance between Hemings and Jefferson is one possible reading of the limited evidence. Others are equally plausible. 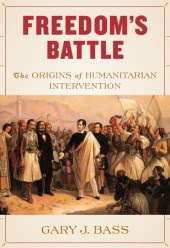 g of the history of humanitarian intervention, and the lessons to draw from it. A thoughtful critical engagement with Bass comes from Samuel Moyn, Columbia University in The Nation. "The most troubling fact about international politics in the nineteenth century," Moyn writes, "is not that moral appeals to save suffering humanity were absent but that they were commonplace." He pushes back from what he describes as Bass's

claims that the European nineteenth century is a precious and neglected resource for anyone who wants to champion human rights in contemporary politics, especially when atrocities take place in distant lands, provided that the suffering is accurately depicted by a free and disinterested press and armed intervention is the only alternative to standing idly by while evildoers slaughter the innocent. Bass recovers a few early cases of humanitarian intervention he considers legitimate in order to supply today's humanitarians with a noble tradition that can be invoked to defend themselves against conservative realists, leftist anti-imperialists and academic nitpickers who doubt the virtues of "humanitarian intervention."

To his credit, Bass is aware of the long and sordid history in the West, going back to the European discovery of the New World and intensifying in the nineteenth century, of false claims to care about foreign evil and human suffering--and co-optations of true claims to false ends....He simply asks the reader to bracket such contradictions at the outset and see if anything noble is left to be salvaged; he wants us to acknowledge the generally tainted nature of nineteenth-century humanitarianism and move on. "There were some important episodes even in a horribly imperialistic age," he writes. "There were, and are, real universalists."

But Moyn asks, "can cherry-picked cases really win over our minds about nineteenth-century do-goodery? It's a question worth asking, since Bass, after admitting he has bracketed much evidence that contradicts his heroic presentation of these episodes, goes on to champion them anyway." Ultimately, Moyn's concern is the

disquieting possibility that humanitarianism, while universal in its rhetoric, has always turned out to be a specific political project in practice. If this interferes with the search for a glorious tradition, perhaps the search makes no sense. All the same,nineteenth-century history teaches that many people desired a version of humanitarianism beyond the form they knew.

The full review is here. A subscription is required, but The Nation has a free trial offer. And of course you can find this in your library.
Finally, Julie Novkov, University at Albany, SUNY, takes up my new book, Exporting American Dreams: Thurgood Marshall's African Journey, in a beautifully w 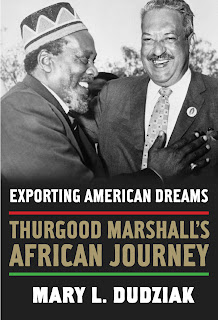 ritten review in the Law & Politics Book Review that will cause readers to want to rush immediately to read Novkov's thoughtful body of work. Her latest book is noted here.
Novkov notes that Exporting American Dreams

connects two stories – the American path from civil rights reform to the national institutional and cultural rejection of racial transformation and the Kenyan path from the boundless possibility and hope of independence to the rise to power of the repressive regime of Daniel arap Moi. The stories parallel each other loosely through their tragic arcs, particularly in the assassinations of movement visionaries Martin Luther King, Jr. on the balcony of a Memphis hotel in 1968 and Tom Mboya on the streets of Nairobi in 1969. But Dudziak puts the stories into dialogue with each other through the person of Thurgood Marshall, who bridged historic events in both nations through his own struggles to facilitate the triumph of the rule of law and the ideal of democratic governance with guarantees for full participation and protection of minority rights....

The [book's] true genius...is in using Marshall as both a concrete and conceptual link between the two movements. Focusing on Marshall enables Dudziak to make two sterling contributions. First, Dudziak thoughtfully addresses Marshall’s position as a symbol not only of black civil rights advancement but also as the embodiment of the American civic commitment to democracy. This analysis links American racial politics with American foreign policy at the core and opens a swath of subsidiary questions for research about how American racial policies shaped, responded to, and ultimately became integrated with American Cold War politics internally and internationally. Second, the selection of Marshall as the central figure raises painful but necessary questions about the rule of law and its capacity to foster and protect justice. Marshall confronted Black Power’s challenge to the state and its theorists’ identification of rule of law as a mere mask for racialized and politicized power relations. Yet he simultaneously closed his eyes to the Kenyan state’s conscious choice to embrace power at the expense of the rule of law and went so far as to praise Kenyatta’s continued fidelity to rights in the face of concrete repression. Does critical race theory’s analysis of law as a tool for reconfiguring power relations coupled with its pessimism about the possibilities for ever achieving racial justice provide a better framework? Or is it necessary, as Mari Matsuda once wrote (1992), to hold the view that the law is the fundamental source of both the most deeply rooted and ineradicable unjust hierarchies of power and our only realistic hope for transformation? [*866]

EXPORTING AMERICAN DREAMS is a thought provoking and painstakingly researched journey through a crucial transformational moment in two nations’ histories. In reflecting closely on Thurgood Marshall’s triumphs and failures in both nations and with both movements, we are invited to reflect on the potentials and core limits on liberalism, democracy, and law as paths to transformation and justice. The invitation seems particularly apt in an era when the United States is once again confronting its own legacy of racial subordination and grappling with questions around nation building and external threat. It is hard at the end of the book not to be frustrated on Marshall’s behalf as well as with Marshall himself. But it is much harder to know who among the contemporary American political and judicial elite might play a role similar to Marshall’s in struggling fiercely to integrate a commitment to the rule of law, to American ideals of liberty and equality, and to the dream of dismantling unjust hierarchies here and abroad.

The full review is here. You can read the Introduction to Exporting American Dreams here.
Posted by Mary L. Dudziak at 11:45 AM