Schmidt on The Sit-Ins and the Failed State Action Revolution

The Sit-Ins and the Failed State Action Revolution is a new paper by Christopher W Schmidt, who is currently a Visiting Scholar at the American Bar Foundation and a Visiting Associate Professor, Chicago-Kent College of Law. Here's the abs 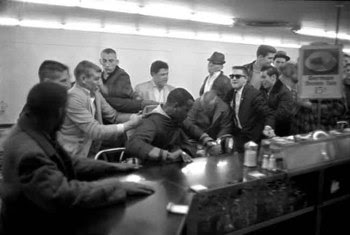 tract:
This article revises the traditional account of why the Supreme Court, when faced in the early 1960s with a series of cases arising out of the lunch counter sit-in movement, refused to hold racial discrimination in public accommodations unconstitutional. These cases are the great aberration of the Warren Court. At a time when the justices confidently reworked one constitutional doctrine after another, often in response to the moral challenges of the civil rights movement and often in the face of considerable public resistance, they broke pattern in the sit-in cases. And they did so despite a transformation in popular opinion in support of non-discriminatory access to public accommodations-a transformation largely brought about by the sit-in protests, which initiated a far-reaching national reconsideration of the scope of the constitutional equal protection guarantee.
Traditional explanations have emphasized the doctrinal complexities of the "state action" limitation on the Fourteenth Amendment and institutional limitations of the judiciary in dealing with the problem of private discrimination. While these factors played a role, I argue that a key reason the sit-in cases failed to fundamentally reshape the reach of the constitutional antidiscrimination requirement was the Supreme Court's refusal to tolerate civil disobedience. In the early sit-in cases, the justices avoided the crux of the state action dilemma, instead attacking southern resistance to Brown v. Board of Education and overturning protesters' convictions based on the existence of official state segregation policy. By 1964, when the Court confronted a case in which there was no state segregation policy to strike down, the increasingly confrontational tactics of the civil rights movement led several justices to become antagonistic toward efforts to challenge laws and practices, however unjust, outside the judicial process. Now it was the disobedience of the civil rights protesters that prevented a majority from supporting the protesters' constitutional claim. In the end, concerns with protecting the rule of law in the face of a society that seemed pulled in increasingly lawless directions prevented a doctrinal revolution.
Photo credit.
Posted by Mary L. Dudziak at 7:01 AM