New from Harvard University Press: Inventing the Immigration Problem: The Dillingham Commission and Its Legacy (May 2018), by Katherine Benton-Cohen (Georgetown University). A description from the Press:


In 1907 the U.S. Congress created a joint commission to investigate what many Americans saw as a national crisis: an unprecedented number of immigrants flowing into the United States. Experts—women and men trained in the new field of social science—fanned out across the country to collect data on these fresh arrivals. The trove of information they amassed shaped how Americans thought about immigrants, themselves, and the nation’s place in the world. Katherine Benton-Cohen argues that the Dillingham Commission’s legacy continues to inform the ways that U.S. policy addresses questions raised by immigration, over a century later. 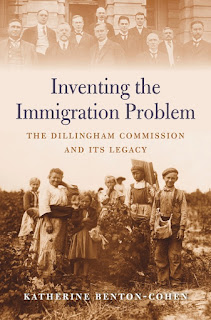 Within a decade of its launch, almost all of the commission’s recommendations—including a literacy test, a quota system based on national origin, the continuation of Asian exclusion, and greater federal oversight of immigration policy—were implemented into law. Inventing the Immigration Problem describes the labyrinthine bureaucracy, broad administrative authority, and quantitative record-keeping that followed in the wake of these regulations. Their implementation marks a final turn away from an immigration policy motivated by executive-branch concerns over foreign policy and toward one dictated by domestic labor politics.

The Dillingham Commission—which remains the largest immigration study ever conducted in the United States—reflects its particular moment in time when mass immigration, the birth of modern social science, and an aggressive foreign policy fostered a newly robust and optimistic notion of federal power. Its quintessentially Progressive formulation of America’s immigration problem, and its recommendations, endure today in almost every component of immigration policy, control, and enforcement.


“Historians have long understood that ‘immigrants were American history.’ This book is a timely reminder that immigrants are also America’s present and future. By locating the development of immigration rules in the global context of the early twentieth century and in domestic conflicts over race, ethnicity, and religion, Benton-Cohen demonstrates the mix of ‘simultaneous suspicion and celebration’ of migrants that remains at the core of today’s conflicts.”—Judith Resnik

“This is a landmark work about a critical turning point in the history of the ‘nation of immigrants.’ In graceful prose, Katherine Benton-Cohen tells how a powerful body of government investigators defined which newcomers were a ‘problem’ and which were not. This set forth policies that radically changed the demography and culture of America. In another era of intense conflict over immigration, there could be no more relevant or timely study.”—Michael Kazin