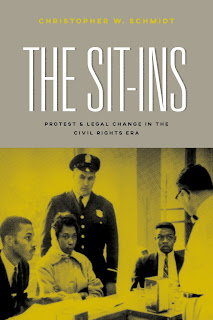 In my last post I explained that one of the reasons I wrote The Sit-Ins was simply because no one else had written a book on the 1960 lunch counter sit-in movement. I felt we need a book dedicated to this important moment in U.S. history. In this post I describe why I believe a legal historian can offer fresh insights on this history.

A central argument of my book is that we can’t fully understand the history of the sit-ins without placing law in the foreground. Behind the now-iconic scenes of African American college students sitting in quiet defiance at segregated lunch counters lies a series of underappreciated legal dilemmas—about the meaning of constitutional equality, the capacity of legal institutions to remedy different forms of injustice, and the relationship between legal reform and social change. We can’t explain why the sit-ins happened and what they achieved without paying attention to the law—a point historians have generally missed.

Here are three questions about the sit-ins that attention to the distinctive legal issues involved helps to answer.

In launching their protest campaign, the students sought to offer an alternative to litigation campaigns that had promised so much but delivered so little.

The Supreme Court’s 1954 school desegregation decision in Brown v. Board of Education had raised expectations for change, particularly among school-age African American children. These expectations had dissolved into frustration as court-centered implementation failed to move a defiant white South to desegregate its schools. When asked why they took part in the sit-ins, students often expressed frustration with the minimal progress southern states had made toward desegregating their schools.

For the students, the courts were something to be avoided—not because they might lose in court, but because even if they won, they were skeptical that real change would follow. This was the ironic lesson that the great legal victory in Brown, which six years later had yet to produce significant results in southern schools, had taught the sit-in generation.

In retrospect, lunch counters seem such a self-evident target for the black freedom struggle. Yet before February 1960, lunch counters were hardly obvious targets. Established civil rights organizations had largely avoided direct challenges to this particular facet of Jim Crow. The reason why had a lot to do with their assessment of the law.

By 1960 most southern states had either removed segregation statutes from the books or no longer enforced these laws. As a matter of law, the key question was whether a private citizen who operated an eating facility, subject to no legal requirement to segregate, could make racially discriminatory choices of whom to serve. Before the sit-ins, civil rights lawyers generally assumed the answer was yes—and they steered attention and resources elsewhere.

The relative neglect of this issue by the major civil rights groups served the student movement well. Discrimination at lunch counters was an offensive practice and no one seemed to be doing anything about it. Among the students themselves and among outside sympathizers, the sit-ins resonated in large part because it was clear that this was the students’ protest, that it was not being orchestrated by far away civil rights strategists or radical ideologues. Lawyers’ legal assessments had left public accommodations an open field for a new wave of protest activity.


3. Why was the opposition so divided?

Law also played a role in weakening the opposition to the sit-in movement.

Those opposed to the goals and tactics of the sit-ins were far from unified. They differed on the strength of their commitment to segregation, on the lengths they were willing to go to protect segregation, and the role that the police and courts should play in this contest. These divisions among southern whites were particularly consequential in the sit-in movement because of the distinctive legal issues involved.

Southern officials and local police generally wanted students arrested and prosecuted for their protest actions. Lunch counter operators, by contrast, were not anxious to send potential paying customers to jail and often hesitated to take this step. Yet, in most cases, only the operators could decide whether to press charges against sit-in protesters. Thus, those who most wanted to use the law to crack down on the students were often unable to do so, while those who least wanted to use the law were the ones who needed to start the legal process. The end result: although many protesters were arrested, the vast majority of sit-in protesters were not. The white South never unleashed its full repressive authority against the student movement.

The fact that these facilities were privately operated—the very legal factor that had initially steered civil rights lawyers away from public accommodations challenges (and that would cause them considerable difficulties in subsequent constitutional litigation on behalf of the students)—undermined efforts to mobilize in opposition to the sit-ins.


In sum, one of my goals in The Sit-Ins is to draw attention to legal issues that historians who have written about the sit-in movement often have overlooked. In my next post I’ll describe another reason I find the sit-ins such a ripe topic for legal historical inquiry: the remarkable debate over the scope of the constitutional meaning of equality the sit-in protests sparked—a debate that took place in the streets, in newspapers, in the offices of mayors, governors, and businessmen, in the courts, and in Congress.
Posted by Unknown at 7:30 AM