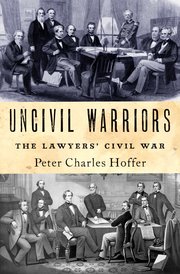 It was a law that empowered as well as limited the government, a law that conferred personal dignity and rights on those who, at the war’s beginning could claim neither in law.

The American Civil War from 1861 to 1865 is arguably the most important event in American history. The United States and the Confederate States of America engaged in combat to defend distinct legal regimes and the social order they embodied and protected. In a “nation of laws,” lawyers and politicians found themselves at the center of this violent maelstrom.  For these men, as for their countrymen in the years following the conflict, the sacrifices of the war gave legitimacy to new kinds of laws defining citizenship and civil rights.

Well-known legal historian Peter Charles Hoffer gives a detailed account on why law and lawyers played such an important role during the Civil War in his new book, Uncivil Warriors. He concentrates on the legal professionals who plotted the course of the war from seats of power, scenes of battle, and the home front.  Lawyers and politicians were everywhere in the executive and legislative branches of government as well as the judiciary.  From the Confederate constitution in Montgomery through the passage of the Thirteenth Amendment in Washington, DC – government lawyers, performing as policymakers, litigators, and jurisprudents, shaped the Union and Confederate causes. Both sides had their complement of lawyers, and in this book, Hoffer provides readers with coverage of both sides’ leading lawyers.

Uncivil Warriors focuses on the centrality of lawyers and the law in America’s worst conflict will transform how we think about the civil war itself.

Endorsements after the jump.

“Peter Hoffer, one of our nation’s most prolific and distinguished legal historians, demonstrates the centrality of law, lawyers, and judges to the road to Civil War and the prosecution of the war. In this readable and wide-ranging book we see how southerners tried to make their actions look lawful and how law was used to justify limitations on radical change. This suggests law can bind us together as a nation, and at the same time, constrains how much we can change.”--Alfred Brophy, Professor of Law and History, University of Alabama, and author of University, Court, and Slave

“Peter Hoffer breathes new life into the cliche ‘the pen is mightier than the sword’ by detailing the major role lawyers played during the secession crisis, defining the objects of the Civil War, justifying legal strategies during the Civil War, and on the northern side, developing the constitutional justification for the more powerful regime that emerged in the wake of the Civil War and that regime’s commitment to equality.”--Mark A. Graber, Regents Professor, Carey School of Law, University of Maryland

“Peter Hoffer’s lively and engaging account of the lawyers who shaped the constitutional and political strategies of both the North and South during the Civil War convincingly places law at the center of the conflict. As much as the generals, these lawyers helped determine the outcome of America’s most devastating war.”--William E. Nelson, Edward Weinfeld Professor of Law and Professor of History, New York University