Rights and Wrongs: A Constitution and Citizenship Day Conference at SFSU

We welcome proposals for papers, presentations, panels, roundtables, teach-ins, and workshops at “Rights and Wrongs: A Constitution and Citizenship Day Conference,” which will take place on 17-18 September 2018. 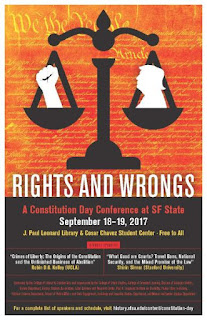 Over the last year, the people of the United States have participated in far-reaching debates and discussions about the U.S. Constitution. Many of these conversations have focused on democratic governance and its relationship to presidential elections, foreign collusion, political corruption, voting rights, legislative redistricting, and constitutional impeachment. Others have addressed specific constitutional provisions such as freedom of speech, freedom of the press, separation of church and state, privacy rights, rights to bear arms, protections against unreasonable searches and seizures, birthright citizenship, due process rights, and rights of equal protection. Meanwhile, some of the most polarizing national discussions of 2017 and 2018—about racialized policing, immigration restriction, sanctuary cities, health care, sexual harassment, LGBT rights, hate speech, and gun control—have been framed as matters of constitutional meaning and significance. Just as important and revealing are the constitutional topics that much of the country has not been considering, including the rights of indigenous, colonized, incarcerated, and institutionalized peoples on lands currently claimed and controlled by the United States.

Please join us to discuss these and other issues at “Rights and Wrongs.” San Francisco State University has a proud tradition of sponsoring Constitution and Citizenship Day conferences. Last year’s event was sponsored by the College of Liberal and Creative Arts and cosponsored by eleven other colleges, schools, departments, centers, and other campus organizations at SFSU. More than 1600 faculty, students, and community members attended the event, which featured faculty, graduate student, and community-based presenters. As was the case last year, the 2018 conference will provide multiple opportunities to reflect critically on the past, present, and future of constitutional rights and freedoms and larger questions about equality, democracy, and justice.

The Sponsor is the College of Liberal and Creative Arts.  Co-sponsors are the History Department, College of Ethnic Studies, Division of Graduate Studies, College of Extended Learning, School of Public Affairs and Civic Engagement, Paul K. Longmore Institute on Disability, Modern Languages and Literatures Department, Philosophy Department, Labor Archives and Research Center, Jamie and Phyllis Pasker Chair in U.S. History, and more to be announced.
Posted by Dan Ernst at 9:30 AM