Anne Twomey, University of Sydney, has published The Veiled Sceptre: Reserve Powers of Heads of State in Westminster Systems in the series Cambridge Studies in Constitutional Law.  The book draws upon much original historical research in archives in former British colonies, including Canada, Australia, New Zealand, India, Malaysia, and many Caribbean and South Pacific nations. 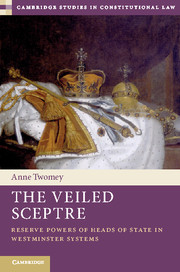 This book is a comprehensive review and analysis of the reserve powers and their exercise by heads of state in countries that have Westminster systems. It addresses the powers of the Queen in the United Kingdom, those of her vice-regal representatives, and those of heads of state in the less studied realms and former colonies that are now republics. Drawing on a vast range of previously unpublished archival and primary material, The Veiled Sceptre contains fresh perspectives on old controversies. It also reveals constitutional crises in small countries, which have escaped the notice of most scholars. This book places the exercises of reserve powers within the context of constitutional principle and analyses how heads of state should act when constitutional principles conflict. Providing an unrivalled contemporary analysis of reserve powers, it will appeal to constitutional scholars worldwide and others involved in the administration of systems of responsible government.

TOC after the jump
1. Prerogative and reserve powers
2. Advice to and from the head of state
3. Appointment of the chief minister
4. Dismissal of governments
5. Dissolution
6. Caretaker conventions
7. Summoning parliament
8. Prorogation
9. Royal assent
10. The rejection of advice to act illegally or unconstitutionally
11. Appointment and dismissal of vice-regal officers.