Eric M. Freedman, the Siggi B. Wilzig Distinguished Professor of Constitutional Rights at the Maurice A. Deane School of Law at Hofstra University, has published Making Habeas Work: A Legal History, with NYU Press. 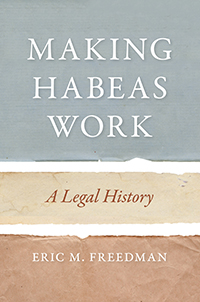 “Eric M. Freedman is one of the most important legal thinkers in the area of habeas corpus, and this book reaffirms that status. Keeping one foot in the present and the other firmly planted in the past, Freedman shows how, without the perspective of history, modern jurisprudence can and does go wrong. A compelling reformulation of our understanding of habeas based on extensive historical research.”
—Austin Sarat, William Nelson Cromwell Professor Of Jurisprudence & Political Science, Amherst College

“This impressive work of scholarship by one of the leading national experts on habeas corpus draws deeply on history to expand and enrich the modern understanding of the writ. The book is an invaluable resource for legal scholars, the judiciary, and the practicing bar. Its insights will almost certainly surprise  readers, just as they have surprised and informed us notwithstanding our long immersion in the topic.”
—Randy Hertz and James S. Liebman, co-authors, Federal Habeas Corpus Practice and Procedure (LexisNexis 7th ed. & annual supplements)

“Professor Eric Freedman has written a wonderful book explaining the historical and contemporary importance of habeas corpus in protecting liberty.  The book is original in its research and also in its analysis, as Professor Freedman explains the role of habeas corpus in a system of checks and balances.  This clearly written, thorough examination of habeas corpus is an important contribution to the literature of constitutional law, criminal procedure, and federal jurisdiction.”
—Erwin Chemerinsky, Dean and Jesse H. Choper Distinguished Professor, University of California, Berkeley Law School
Posted by Dan Ernst at 12:30 AM