Congratulations to Laura Kalman, University of California, Santa Barbara, for winning the 2017 David J. Langum Sr. Prize in American Legal History for The Long Reach of the Sixties: LBJ, Nixon, and the Making of the Contemporary Supreme Court (Oxford University Press).  Here’s the citation: 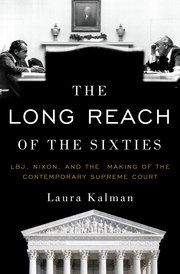 This exuberant book explains how political controversies during the tumultuous Johnson and Nixon presidencies influenced the nomination and confirmation of U.S. Supreme Court justices and permanently transformed Supreme Court appointments process by intertwining it with the political agendas of presidents, Congress, and special interest groups.

Kalman’s meticulous research introduces newly mined information, fresh insights, and a dazzling array of delicious anecdotes into the controversies that swirled around the Supreme Court appointments of Johnson and Nixon, a subject that already has received substantial attention from historians. She deftly weaves political ideology, party politics, personalities, race, gender, and judicial issues into an exciting account of the forces that influenced the “liberal” appointments of Johnson during the waning years of the Warren Court and the “conservative” appointments of Nixon that attempted, but largely failed, to unravel the decisions of the Warren Court.

Although political considerations always have influenced Supreme Court appointments, Professor Kalman explains that presidents beginning with Johnson have been particularly assiduous in attempting to perpetuate their political legacies by nominating men and women whose political views will shape public policy through judicial decisions for decades to come. The rising political stakes of appointments has generated much greater scrutiny of nominees, increased the proportion of controversial nominations, and exacerbated partisanship in the appointments process.