Howard Pashman has published Building a Revolutionary State: The Legal Transformation of New York, 1776-1783, in the Ameruican Beginnings, 1500-1900, series at the University of Chicago Press: 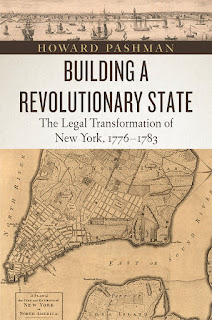 How does a popular uprising transform itself from the disorder of revolution into a legal system that carries out the daily administration required to govern? Americans faced this question during the Revolution as colonial legal structures collapsed under the period’s disorder. Yet by the end of the war, Americans managed to rebuild their courts and legislatures, imbuing such institutions with an authority that was widely respected. This remarkable transformation came about in unexpected ways. Howard Pashman here studies the surprising role played by property redistribution—seizing it from Loyalists and transferring it to supporters of independence—in the reconstruction of legal order during the Revolutionary War.

Building a Revolutionary State looks closely at one state, New York, to understand the broader question of how legal structures emerged from an insurgency.  By examining law as New Yorkers experienced it in daily life during the war, Pashman reconstructs a world of revolutionary law that prevailed during America’s transition to independence. In doing so, Pashman explores a central paradox of the revolutionary era:  aggressive enforcement of partisan property rules actually had stabilizing effects that allowed insurgents to build legal institutions that enjoyed popular support.  Tracing the transformation from revolutionary disorder to legal order, Building a New Revolutionary State gives us a radically fresh way to understand the emergence of new states.

“Building a Revolutionary State is a masterful socio-legal history of how New Yorkers transformed the instability and turmoil of the American Revolution into a new, stable legal order. Moving beyond republican ideology and constitutional politics, Pashman uncovers the felt realities of how New York insurgents paradoxically used property redistribution to create popular support for a new source of legal authority. This book will be required reading for anyone interested in the history of American law and state formation.”  Ajay K. Mehrotra, Northwestern University

“Pashman has given us the first study of how legal order emerged from disorder during the American Revolution. He shows New Yorkers creating local committees to deal with the Loyalists among them and argues convincingly that the legitimacy of the legal institutions that later emerged rested on vigorously expropriating Loyalist property. A powerful statement that the new nation was built, at least in part, on retribution and redistribution.”  Bruce H. Mann, Harvard University
Posted by Dan Ernst at 11:00 AM